" The thread is sacred and must not be cut" 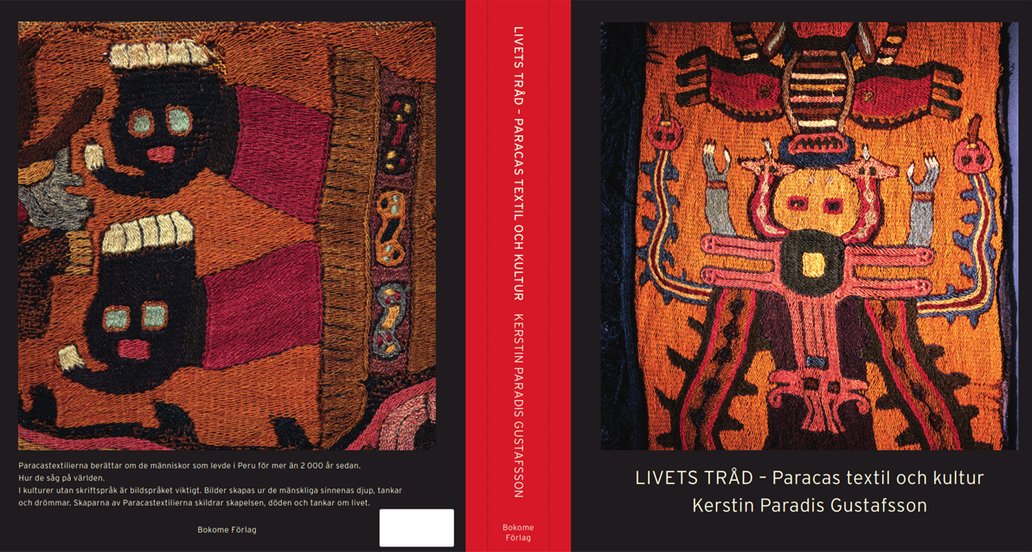 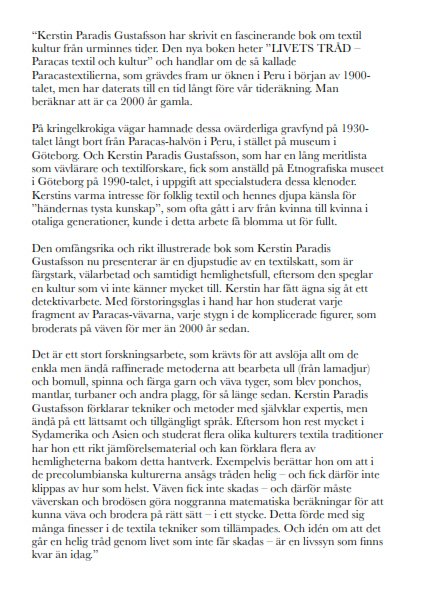 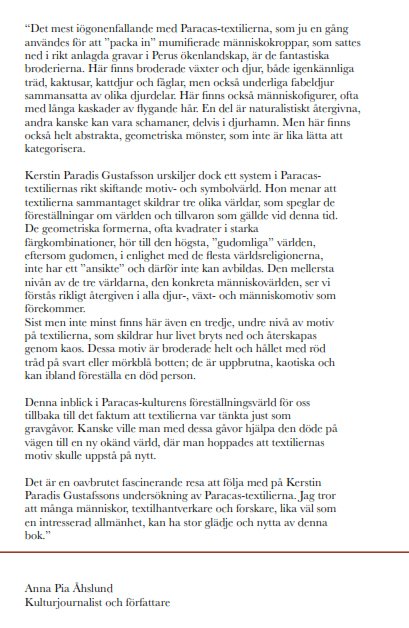 The Paracas textiles were created more than 2000 years ago. I had the opportunity to see them at exhibitions in the Museum of Ethnology in Gothenburg, in Lima and at the site in Paracas, the place where they were found in the desert sand and which has given them their name.  I have been amazed over these textiles, how they are technically performed and the stories they tell.

Kerstin Paradis Gustafsson has worked at the former Museum of Ethnology in Gothenburg during the time when a larger amount of these textiles were kept in the collections. She has inventoried and analyzed them and cracked the codes about the way they were made. She also has presented underlying theories about the meaning of them. How the unbroken thread symbolizes life and gives the conditions for the techniques.

The fact that Kerstin Paradis Gustafsson is both a talented artisan who can spin, weave, embroider and masters many other textile techniques and furthermore provides a variety of references via research and travels makes this book a valuable documentation. The book has a rich imagery and gives important keys for understanding how and why these textiles were created.

The new book is called “THE LIFETHREAD – Parcas textiles and culture” and deals with the so called Paracas Textiles, which were dug out of the desert in Peru in the beginning of the 2000th century, but have been dated back to a time long before our era. They are estimated to be around 2000 years old.

On winding roads, these invaluable grave finds from the 1930ties in far away Peru, found the way to the Museum in Gothenburg. Kerstin Paradis Gustafsson, who has a long meritlist as a weaving teacher and textile researcher was given the task of scrutinizing these treasures, as an employee of the Museum of Ethnology in the 1990ties. Kerstin’s great interest in traditional textiles and her deep sense for “the silent knowledge of the hands”, which often has been passed on from woman to woman through the generations, is allowed to flourish in this work.

This comprehensive and richly illustrated book which Kerstin Paradis Gustafsson now presents is an in-depth study of a textile treasure, which is colourful, well made and at the same time secretive, since it is reflecting a culture which we know very little about. Kerstin has had to devote herself to detective work. With a magnifier in her hand she has studied every fragment of the Paracas textiles, every stitch in the complicated figures, which were embroidered on the weaves more than 2000 years ago.

An extended research was needed to unveil everything about the simple but exquisite methods used to process the wool (from llamas) and cotton, spin and dye yarn and weave the cloth, which were made into ponchos, mantles, turbans and other garments. Kerstin Paradis Gustafsson explains techniques and methods with obvious expertise but also in an easy and accessible language. Since she has travelled a lot in South America and Asia and has studied several different cultures’ textile traditions she has an abundance of material to compare with and can explain several of the secrets behind this handicraft. As an example she explains that in the Pre-Columbian cultures the thread was considered sacred – and could not be cut off. The weave was not allowed to be damaged – and consequently the weavers and embroiders had to make thorough mathematical estimates to be able to weave and embroider in the right way – in one piece. This led to many refinements in the textile techniques applied here. This idea about a holy thread leading through life, which cannot be damaged – is a philosophy visible to this day”.

“The most conspicuous about the Paracas textiles, which were used to “wrap-up” mummified human bodies buried in richly landscaped tombs in the Peruvian desert, are the magnificent embroideries. Here you find embroidered plants and animals, recognizable trees, cacti, felines and birds as well as strange fabulous creatures composed of different animal parts. Here are also human figures often depicted with long cascades of flying hair. Some are naturalistically rendered but others may be shamans partly in animal harbour.  There are also completely abstract, geometric patterns, which are hard to categorize.

But Kerstin Paradis Gustafsson is able to discern a system in the Paracas textiles’ richly varied motifs and symbolic world. Her hypothesis is that the textiles overall describe three different worlds, which mirrored the views of the world and the existence which applied at this time. The geometric forms, often squares in bright colour combinations, belong to the highest “divine” world, since the deity, in accordance with most world religions do not have a “face” and therefore cannot be depicted.  The middle level of the three worlds, the concrete human world, we can observe richly displayed through all the animal, plant and human motives.

Last but not least there is a third, lower level of motives on the textiles, which depicts how life is broken down and recreated through chaos. These motives are completely embroidered with red thread on black or dark blue ground fabric; they are broken, chaotic and can sometimes represent a dead person.

This insight into the Paracas culture’s imaginary world takes us back to the fact that the textiles were used as grave goods. Maybe these gifts were meant to help the dead on his journey to an unknown world, where it was hoped that the motives of the textiles would re-emerge.

It is an uninterrupted fascinating journey to follow Kerstin Paradis Gustafsson’s research of the Paracas textiles. I believe that many people, artisans and researchers, as well as an interested public, can have great joy and benefit from this book.”